with the Weibull, Gumbel, Quick, and log-Quick functions defined as, respectively: 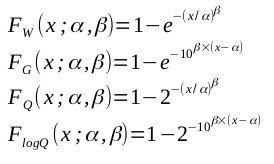 in which ψ refers to the proportion of correct (or 'yes') responses as a function of the stimulus intensity x. The lower asymptote of ψ is given by γ (often referred to as the guess rate), while its upper asymptote is determined by λ (aka the lapse rate). F in the equation characterizes the sensory mechanism. It has two parameters, α (aka the location or threshold) and β (aka the slope parameter).

These four fits all correspond to one and the same psychometric function, namely the green curves in the figures below. Note that the fitted parameter values differ only in the value of the fitted threshold. The value of the threshold estimate for the Gumbel is simply the log-transform of the threshold estimate for the Weibull [log10(0.0594) = -1.226]. Thus the Weibull and the Gumbel are identical except that the Weibull uses a linear scale for contrast whereas the Gumbel uses a logarithmic scale. Similarly, the Quick and the logQuick functions are identical to each other except that the Quick operates on a linear scale but the logQuick operates on a logarithmic scale. The difference between the Weibull and Gumbel on the one hand and the Quick and the logQuick on the other is that, for the former pair, F (in the equation above) evaluates to 0.6321 (1 – e-1) at threshold whereas for the latter pair F evaluates to 0.5.

Note that two PFs of the same kind (i.e., both are Weibull, or both are Gumbel, etc.) that differ only in the value for the threshold are (rigid) translations of each other when plotted on a logarithmic scale, whereas they will differ in their shape when plotted on a linear scale. 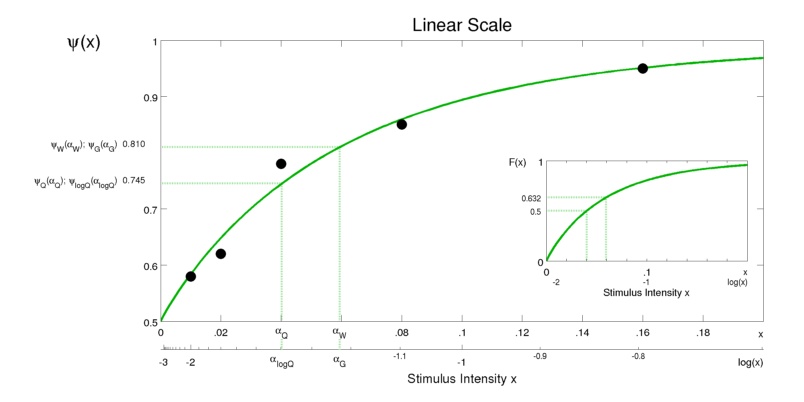 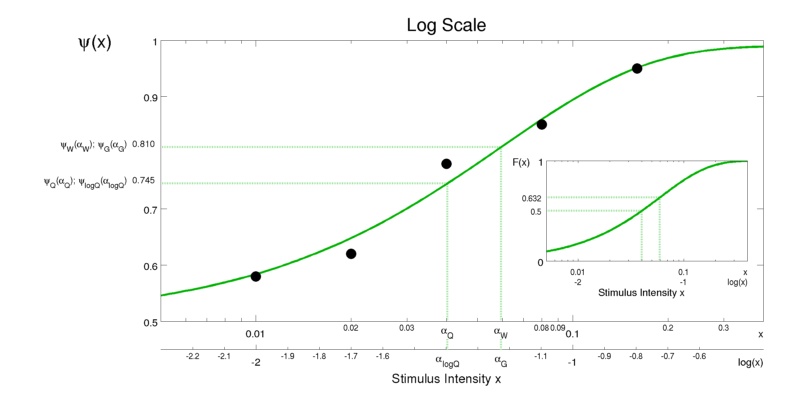